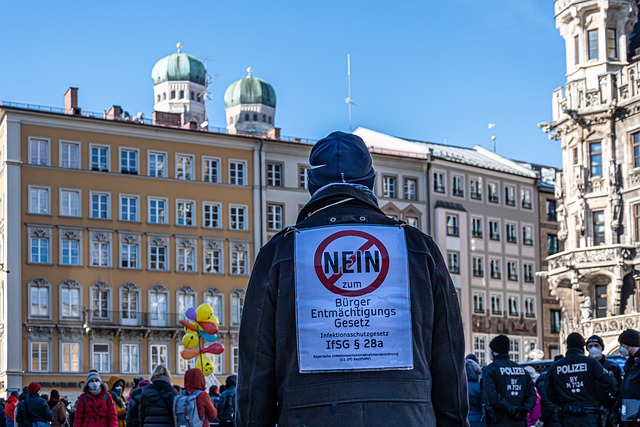 Image by Michael Hofmann from Pixabay

As Europe’s Lockdowns Drag On, Police and Protesters Clash

In Britain and beyond, protesters on the left and right are rebelling against virus restrictions, drawing harsh police responses — and questions about the officers’ legitimacy.

Wisdom, possibility, and creativity exist in everyone. The role of the media and the leaders is to create an environment that brings THIS to light.

As a responsible participant I will listen to what is required in order to serve the higher good of all and of everything.

But what does “what is required” mean when there is no frame of reference? How does one know how to go about it when there are no agreed upon assumptions? Because a ‘frame of reference’ is a premise, a thought. And a responsible participant will cast doubt on old premises and thoughts, and will ask – what would life be like without them?

The mind that is run by fear – interpreting, analyzing, preventing, solving,  leads to a survival mode. Where it can no longer exist or when we don’t obey it blindly – there exists the kind of knowledge which is life giving.

Responsible participation is not to shut myself off but to truly experience. Ask to be touched, ask to be shaken to the core and hear the silence that can be heard between the words. This silence reminds us of what really is.

After reading the article from the eyes of  New Journalism Project –

The watchdog of democracy will be responsive, look for that which is broken and missing. It will be driven by fear. The building blocks of the press, which sees itself as the watchdog of democracy, are intimidation, power and separation. This kind of press creates an identification with those who are in danger (the population), and the greater the danger is, the greater the identification. This kind of press forms an alliance with this population, because when there’s a threat, there’s a natural cohesion, and the press is the catalyst.

Because the watchdog of democracy is the watchdog of the people who perceive themselves as weak and vulnerable, the watchdog assumes that leaders are corrupt and hungry for power and will not shy away from manipulation, deception and exploitation to maintain their rule.

It sees those who are in power as a threat and brings up this perspective at every opportunity. By doing so, it gives validity to those who struggle and to the press itself; because if there are “good people” and “bad people”, someone has to defend the “good people”.

Then, all players remain in place, actions take their toll and create friction, pushing each side to the extreme. This creates situations where everyone struggles, more and more, and ends up exhausted with disappointing or temporary results, until the situation is reversed again.

If I pause for a moment and listen to what is asked, I will see not only what is happening now, but also what is no longer relevant and doesn’t serve anything, in fact, it turns out to be a path which leads to a dead end.

So, when we do not turn again to what is out of date, we are free to see and recognize ‘the new’ – the time that has come. The lens is clear and the mind is awake and sharp.

For example, what would we see and which possibilities would open up to us if we recognize that restrictions on free-movement do not always endanger us, and do not impair our happiness?

What would we see if we knew that our joy, happiness and creativity are not harmed in any way, even when we are limited by someone else?

What would happen if we knew that not everything presented as being done for our benefit actually came to serve us?

How would we live, if we knew that not everything that is suspicious in our eyes is meant to deceive us in order to control us?

Maybe if we would ask these questions and allow doubt and humility, we would get closer, inquire with and through the other and act out of the kind of caring and responsibility that may evolve only from love?

What if we knew we were one, literally one body, and when one hurts another, he hurts himself?

How would I react then to a police officer who acts violently? Or to a COVID protester who violates safety instructions? Would I fight him or ask him if this is how he would like his son, daughter, parent or wife, to be treated?

What would it look like, if I knew I did not want to engage in a struggle but I did want to engage with what I could learn thanks to it? And I would do so fully and share it with many, and wish to hear their wisdom, and spread responsible participation,  and seek to create a smarter reality, sober from stories and opinions. And more loving.

The life you have

It is the life you lived

Look back with understanding

This is the best world

That you can create

It’s all inside you

Start from the beginning…….